according to Andrzej Strug

"Big day. A Chronicle of the Events which Never Happened" by Andrzej Strug was printed in parts in Kurier Poranny in 1926, and was published in its entirety in 1957. Just like the earlier "Zakopanoptikon", it is a completely different position from Strug's other literary legacy. It belongs to the most outstanding works of the writer, full of brilliant humor and wit, fantasy and situational inventiveness, freedom and panache in creating the world. In addition to the satirical, even grotesque layer of customs taking place in the camouflaged reality of Zakopane in the interwar period, against which the human types were accurately diagnosed, this novel with a key contains a huge amount of the author's knowledge about the mechanisms of power and social action.

The ancient Piwont looked at it and waved his iron cross gloomily.
Andrzej Strug

In 2014, during the 18th National Festival of Comedy TALIA in Tarnów, the Witkacy Theater won the Grand Prix and the Talia Statuette for the performance "Człapówki - Zakopane" by Andrzej Strug. 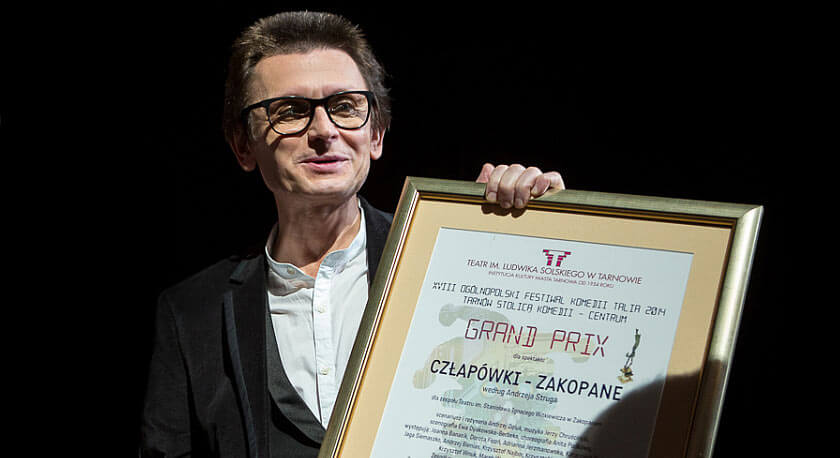 The acting award was also awarded to Andrzej Bienias for magnetism and strength in the performance "Człapówki - Zakopane".

Andrzej Strug
- actually Tadeusz Gałecki (1871-1937),writer, publicist, political activist, co-founder and President of Union of Polish Writers (twice - in 1924 and 1935). After the death of Stefan Żeromski, recognized as a new embodiment of "conscience of Polish literature". Member of Józef Piłsudski's Legions, and also a freemason.

The performance uses the lyrics of songs by Jan Brzechwa, Marian Hemar and Stanisław Porębski, as well as poems by Ignacy Rojewski.